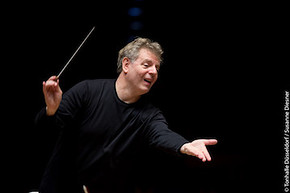 On Sunday 25 March, the Philharmonia Chorus joined soprano Elsa Dreisig, baritone Roman Trekel and the Philharmonia Orchestra at the Royal Festival Hall, London in a performance of Brahms' Ein deutsches Requiem, conducted by Karl-Heinz Steffens. This concert was dedicated to the memory of Stefan Bevier.

Poulenc and Rossini in Lille 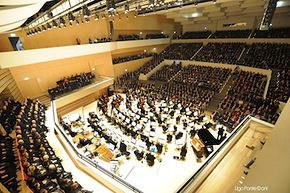 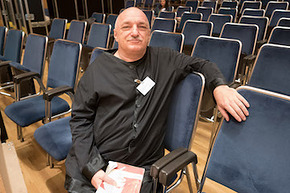 When he first took a Philharmonia Chorus rehearsal in 1999, the members didn't know what had hit them. The endless repetition, zero tolerance of individual voices sticking out - 'No Führer' as he would say, boundless self-assurance. For some singers it was too much, and they fell by the wayside. But by the time of his appointment as Chorus Master in 2010 there were few doubters remaining. He could produce results like no one else. He inspired each singer to go beyond what they believed possible and to communicate to the world the greatness of the music and the glory of the Chorus. 'Send a message out!' he would say, 'Send a message out!'.

His childhood in Landau prepared the ground. He devoured music as soon as he discovered it, first at the piano, and then singing. Many boys are apprehensive about leaving home for boarding at choir school at the age of 7 or 8, but not Stefan. He could not wait to explore Bach, Handel and Schütz. Later in his teens he tried the tuba, with less than impressive results, and then turned to the double bass. Only four years later he joined the seemingly endless queue to audition for Herbert von Karajan for a single place in the Orchestral Academy of the Berlin Philharmonic Orchestra. He was chosen. So at 19, he joined the double bass section of the Berlin Philharmonic, where he stayed for four years.

He said that those were the best of times. He worshipped Karajan, for his uncompromising pursuit of excellence, and for the way he achieved his results. It was not enough to be a first class player - you had to polish the music hard so that it gleamed. This experience remained the defining influence in Stefan's approach to music making, and he brought those values and methods to every ensemble he prepared.

Many musicians would regard playing in the Berlin Philharmonic as the pinnacle of their careers. But Stefan had wider ambitions. He took conducting lessons from Sergiu Celibidache, singing lessons from Dietrich Fischer-Dieskau and embarked upon a career as a bass-baritone. Even at that time, in his twenties, his was in demand as a vocal coach by world-class singers. And conductors would ask him to prepare choruses for them.

A Stefan Bevier rehearsal was like no other. Tough, absolutely uncompromising, not letting anything go, demanding a degree of commitment and concentration from everyone equal to his own. This was infuriating to some, inspiring to others. Humour was never far from the surface. 'A German joke', he would say,'is no laughing matter'. The music too was never a laughing matter for Stefan. It was always treated with the deepest reverence. The music always came first.

Stefan exuded a warmth and humanity that inspired loyalty, affection and devotion in all his singers. He loved being with them. It was impossible to separate his personality from his music making - they were so beautifully intertwined. He spoke of the music conveying an overwhelming human spirit. That is the message he sent out. 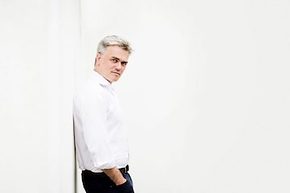 On Tuesday November 12 1957 the Philharmonia Chorus gave its very first performance. The occasion was the culmination of a Beethoven cycle with the Philharmonia Orchestra conducted by Otto Klemperer in Beethoven's Ninth Symphony.

The Chorus marked 60 years of glorious music making on Sunday 5 November at the Royal Festival Hall in a performance of William Walton's spectacular oratorio Belshazzar's Feast, with the Philharmonia Orchestra conducted by Edward Gardner. The concert was recorded by BBC Radio 3 and transmitted on 28 November. 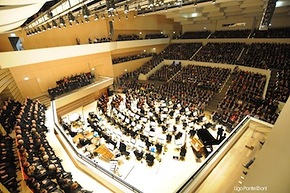 The Philharmonia Chorus made its debut with the Orchestre National de Lille on Friday September 22 in the Auditorium du Nouveau Siècle in Lille with a performance of Ravel's Daphnis et Chloé conducted by the orchestra's principal conductor Alexandre Bloch. This was the opening concert in the orchestra's 2017-18 season.

The concert was repeated on Saturday 23 September, when it was recorded by Mezzo TV for future transmission.

Philharmonia Chorus at the Rheingau Festival 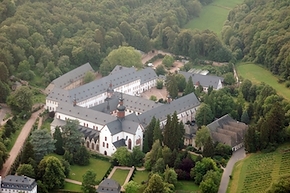 This summer the Philharmonia Chorus made its first appearance at the Rheingau Music Festival in two concerts of English music.

On August 31, the Chorus was accompanied by organist Thomas Frank in a programme of music from the English Musical Renaissance, 1850 - 1930, in the Marktkirche in Wiesbaden. Works by Stanford, Parry, Wood, Elgar and Vaughan Williams and included in the programme, conducted by Stefan Bevier. The concert was recorded by Deutschlandfunk for future transmission.

Two days later on 2 September, the Chorus took part in the final concert of the 2017 Rheingau Music Festival, a performance of Elgar's The Dream of Gerontius in the Kloster Eberbach, with mezzo-soprano Elisabeth DeShong, tenor Brenden Gunnell and baritone Markus Eiche. The Symphoniker Hamburg conducted by Paul McCreesh.