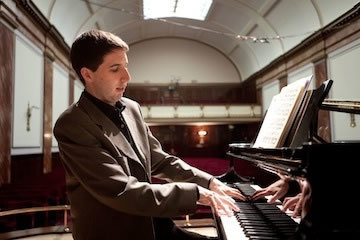 Since the formation of the Chorus in 1957 there have only been four accompanists: Viola Tunnard, Martin Penny, Stephen Rose and Timothy End.

Timothy End graduated with a first class honours degree in music from King's College, London in 2006 before entering the Royal Academy of Music, gaining the DipRAM award for an outstanding recital. He held the Shinn Fellowship at RAM for 2008-09 studying under Julius Drake and Patsy Toh.

A multiple first-prize winner, Timothy was awarded both the Pianist Prize and Jean Meikle Duo Prize with the baritone Jonathan McGovern at the Wigmore Hall Song Competition in September 2011. Further prizes include the Acccompanists' Prize at the Maureen Lehane Vocal Awards, the Parnell Award for an Accompanist at the ROSL Annual Music Competition, the Gerald Moore Award and the MBF Accompanist Prize at the Kathleen Ferrier Competition. Timothy was chosen to be a Samling Scholar in May 2011, culminating in concerts in Newcastle and at the Sage, Gateshead. He performed alongside Malcolm Martineau and Sir Thomas Allen at a Samling Showcase at the Wigmore Hall last December.

Recent engagements have taken him to Washington D.C., New York, Cologne, Graz and Budapest. In November he performed at the inaugural Placido Domingo Festival in Seville in a Broadway programme with the American sopranos Angel Blue and Micaela Oeste. This was repeated in Paris at UNESCO for Placido Domingo. Earlier this year Timothy performed at a ROSL Gala held at St James's Palace, in front of Princess Alexandra.

Timothy started working with the Philharmonia Chorus in 2012.