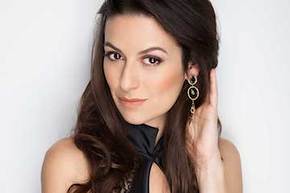 The first Philharmonia Chorus Masterclass took place on 6 December at the Bridewell Hall,St Bride Foundation, with soprano Chen Reiss. One reaction on Twitter - 'Absolutely great masterclass with ChenReiss and the Philharmonia Chorus. Haven't seen something so interesting in a long time.' .

Chen Reiss is one of the world's most accomplished sopranos. She has performed leading parts at the Vienna State Opera, Bavarian State Opera, Théâtre des Champs-Elysées, Teatro alla Scala, Semperoper Dresden, Deutsche Oper Berlin, Hamburg State Opera, Maggio Musicale Fiorentino, Opera Company of Philadelphia and the Israeli Opera. On the concert platform she has appeared with many distinguished conductors, and she is also an active lieder singer. Her solo album, Liaisons, won the Diapason d'Or in 2011, and her most recent album Le Rossignol et la Rose with pianist Charles Spencer, has been released by ONYX Classics.

Mahler 2 recording with Benjamin Zander nominated in the Grammys 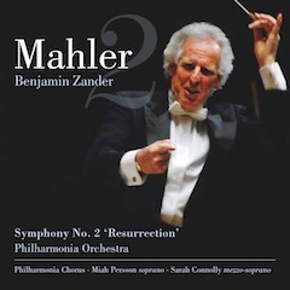 The new recording of Symphony No.2 'Resurrection' by Gustav Mahler with soprano Miah Persson, mezzo-soprano Sarah Connolly, the Philharmonia Chorus and the Philharmonia Orchestra conducted by Benjamin Zander has been in the nominations for this year's Grammy Awards. The nomination - Mahler: Symphony No. 2 'Resurrection' (Benjamin Zander, Stefan Bevier, Philharmonia Chorus & Orchestra) - is in the portfolio of Elaine Martone in the category of Best Producer of the Year

The recording was regarded as the 'one to take away' in a comparison of recent releases of the symphony on BBC Radio 3's CD Review in March earlier this year. The recording is available from Linn Records.

The Philharmonia Chorus was prepared by chorus master Stefan Bevier, and the recording was made in Watford Colosseum under the supervision of recording engineer Robert Friedrich and his team.

Bruckner's Te Deum in the Sheldonian 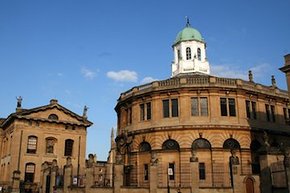 For Anton Bruckner, the Te Deum was 'the pride of his life', and it is undoubtedly his greatest sacred choral work. It is both joyful and compelling, propelled forward by the furious central section' Aeterna Fac'. 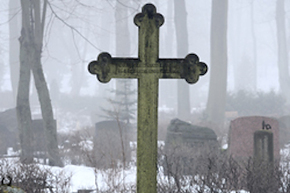 The Philharmonia Chorus made its debut with the Orchestra of Classical Opera at the Barbican on Wednesday 8 October. Ian Page conducted a performance of Mozart's Requiem, with soloists Sophie Bevan, Sarah Connolly, John Mark Ainsley and Darren Jeffrey, preceded in the first half of the concert by Haydn's motet 'Insanae et vanae curae'.

The Kyrie fugue, Dies Irae and Lachrymosa from this performance can be heard here.

Mahler 2 at the Proms 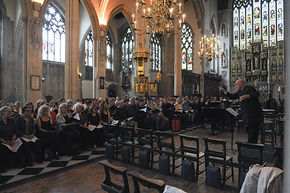 The Philharmonia Chorus appeared at the 2014 BBC Proms season in a performance of Mahler's Symphony No.2 'Resurrection' on Friday 29 August. 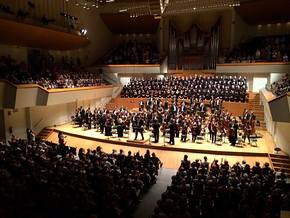 The Philharmonia Chorus made its debut with the Orquesta de Valencia in the Palau de la Música, Valencia on Friday 13 June.

The Te Decet Hymnus from this performance can be seen here.